Courtesy:Smt.Dr.Saroja Ramanujam
"Mother I want to have that." The child cried. He is the dearest son of the emperor and where is the difficulty for him to get what he wants? Yet the mother was baffled.
He was asking for something even the Dasaratha chakravathi could not get for his beloved son. Yes , Rama as a child was asking for the Moon!
The mother tried to coax him with other precious gifts, toys and playthings studded with gems and made of gold. But he threw everything and cried, "I want only the Moon to play."
Dasaratha and ll his wives and attendants of the palace came running and tried all sorts of means including an image of Moon made in gold and silver with emerald for the mark in the Moon. No Rama would not be satisfied.
Dasaratha said , " Go ancall Lakshmana. Rama will be pacified if he sees Lakshmana. They brought Lakshmana and Rama smiled at him stopping his cry and they exchanged smiles as though in some intrigue! But then Rama said, "Look Lakshmana, they refuse to bring me the Moon for play.
Adhisesha who was Lakshmana laughed at this and inwardy said, "Why my Lord, the Moon will come to you if you call him. Is it not said In the scriptures, 'ethasya praSaasne sooryaachandhramasou viDHrthou thishTathaH'? By your command the Sun and the Moon are held in their post.
But Rama told him silently " Oh no, we are here to play our roles in the dram as humans.. So you also play your part. Then Lakshmana the child also started crying since he will always follow Rama in sukha and dhuhkha. Now it was the task of the parents to console two children crying!
Then Vasishta was called and he was amused to see the Lord of the Universe playing the part of an ordinary obstinate child. He thought that he could very well understand why Rama wanted the Moon. The Moon signified the one who was going to appear in the clan of the Moon whom he misses since he left the milky ocean. Yes he is reminded of Lakshmi who was going to incarnate as Seetha. Vasishta smilingy told Rama , "Wait Rama all in good time."
But Rama was not to be pacified. Then Sumanthra the wise minister of Dasaratha had a brilliant idea. He brought a mirror and gave it to Kousalya and she showed the Moon to Rama in that mirror and Rama grabbing it was satisfied and laughed.
What a drama by the Lord to show that all we see and experience in the world is only a reflection of an infinitesimal part of His glory! 'paadho asya viSvaa bhoothaani thripaadhasyaamrtham dhivi.' 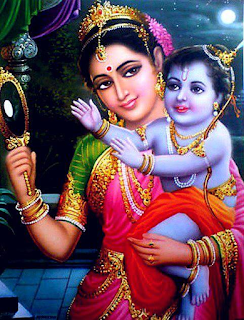